skip to main | skip to sidebar

Nothing says 1984 quite like Rhinestone and legwarmers. Tonight I was browsing through some knitting websites and have been sincerely appalled by the number of legwarmer patterns. I mean really. I know I am not the first knit-blogger to take notice of this phenomenon and (Lord willing, not the last) but I just can’t stop myself from chiming in. 80’s fashion was a mistake the first time around and we should not have to relive it again already. Unless you are involved in some sort of Fame revival production, you should not wear legwarmers. Or collarless sweatshirts. Or feathered bangs.

Maybe it is the medication getting to me, but I’ve been on an old movie kick the last few days. Perhaps, more likely, it is the days of being laid up, sleeping too much, rattling around the house and watching crappy TV. Tonight it was Rhinestone. Seriously, how can you go wrong with Dolly and her big hair and big…voice…and Sylvester Stallone in glitter outfits and cowboy hats? Who could keep from smiling hearing Sly singing “Budweiser you made me a monster….and they call me – Drinkin’ Stein.” 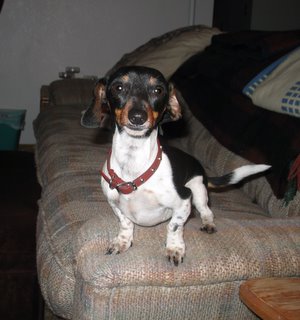 I’m not Catholic so this is the closest thing I have to a confessional.

I haven’t shaved my legs in two weeks. It is gross. Really. Like, it makes my legs hurt when I where pants. You would think this would cause me to shave them. No. Instead, I have spent this last week of convalescence not wearing jeans. I think I am really going to have to shave tomorrow. It is, umm, gross.

I've been feeling a little knitting burnout of late. I am determined to get going on something fabulous within the next week. Do ya'll ever feel less than inspired?

Except for the lovely pork chop dinner my Mama cooked for me last night (how do I love her, let me count the ways…) all I have eaten in the last three days is cold pizza and Stove Top stuffing. Yummy, stuffing.

I spend ridiculous amounts of time daydreaming and visiting this website about Greenland. I’ve got a secret stash of money tucked away (a negligible amount, really, but ferreted away, nonetheless) that no one but me knows about (well, until now) and I will go to Greenland one day. I want to learn the language but I get conflicting reports about what language that would be. Some sites/books say Danish and some say Greenlandic. I think what I really need is a pen pal from Greenland. Anybody out there?

I love big earrings but I think I look silly when I wear them because I have a short neck. (What? I didn’t promise these confessions were going to be profound!)

Sometimes I think alcoholism would be a good diet. I mean really – just replace two meals a day with liquor and you’d be home free. Of course, skinny with a poisoned liver is probably not a great alternative.

Hey everybody. I've been MIA. Sorry.

I haven't been knitting much. I've knitted a baby hat for a friend. I do have the pictures of the shrinky dink pins like a promised. (Here's that baby hat. I still need to weave in some ends.) 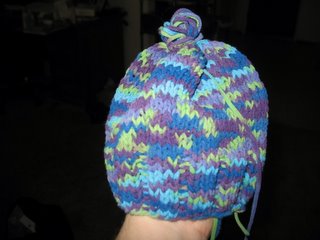 For the last week, I have been sick. Lounging around in a lump in my recliner. I've got pneumonia and bronchitis and a double ear infection. My chest hurts so bad - I feel like somone dropped a ton of bricks on me. I've coughed so much my head hurts. My joints ache and my nose is raw from sneezing and blowing. Bleck.

Aren't you glad you asked?

Have ya'll been watching the Olympics? I love the Olympics. Between this pneumonia, et al and the miracle that is tivo, I have been able to watch more Olympic coverage than ever before. I love the gut-wretching personal stories of sick parents and personal sacrifice and misery. Those pieces are almost better than the big crashes and the medal ceremonies.

I need to get busy on the baby knitting for friends. Just a few years ago, everyone I knew was getting married. Now everyone I know is getting pregnant. This past weekend, I found out that my friend Courtney is pregnant. Hurray!!! (Of all of the babies on the way, I am most excited for Courtney.) We are keeping our fingers crossed that she will have a girl. Of course, she is only about 5 weeks or so along so that determination is some ways off. So for now I think I am just going to knit white things for this baby.

I think I am going to go back to sleep now. I promise no more long hiatuses. Thanks for stopping by. Here are the pictures of the pins. They are so cute. And easy to do. You can see the fruits but mostly they are butterflies and bugs. And there are a few zoo animals mixed in there, too. 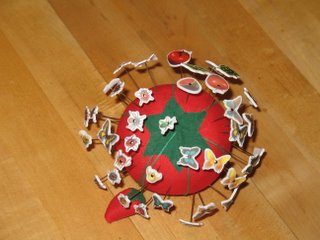 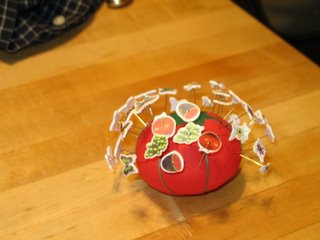 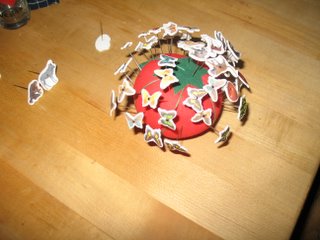 Tonight I had to take someone out to dinner for work. It was actually quite a nice dinner.

Now that I am back home, I am making some of these. I found some shrinky dink sheets that can go through my printer. It is fabulous. I will show you pictures tomorrow. So cute.

Also, last night, I cast on and knit the first three inches of my second pair of fuzzy feet. These are for my friend Allison. She bought the yarn to make them for herself but she ran out of ambition for fuzzy feet so now I am doing them. They are such a funny quick knit so I don't mind.

My handsome prince's uncle past away this week. Today was his funeral. It was a very emotional day, of course, but there was joy, too. His remaining siblings, Clark, Orville, Jane & Gloria, had an opportunity to visit for the first time in a long time and that was wonderful. We are spending some time with the HP's mother and aunts this weekend so it will probably be quiet here at Ok! What Next?

Thanks for all the kind birthday wishes. It was a very nice day and a good week. Thank you for you all for stopping by.

God bless Gordon's wife and children in this difficult time. 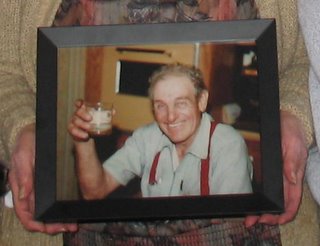 Kristy
I live, work and knit in Northern California, where I spend more time working than anything else and I think this is one of the world's greatest tragedies. My husband pretends to care about knitting and I pretend that it matters.

Contribute to the Cause!

Previously on Ok! What Next??