skip to main | skip to sidebar

The Joy of Christmas

I'm home and still in one, recently modified, piece.
Ankle
It has now been two weeks since my surgery. I spent the first 8 days in the hospital. Overall, they took great care of me and, as much as I love being home, I was glad to stay there and let them take care of me. There is a lot to be said for IV pain medicine and that orange nurse call button. So, first week there, second week home. I did basically the same thing both weeks: slept, took my meds, drank a lot of water. Yesterday I went to the doctor to have my stitches and staples removed (16 and 6, respectively) and to have my cast changed. The new cast is glow-in-the-dark. Umm. This is the highlight of the news from my corner of the world. (ha)
Thank you all for your emails and your kind words.
.
Knitting
I've been doing some knitting, mostly simple little bits and pieces that lend themselves to dozing off in the middle. 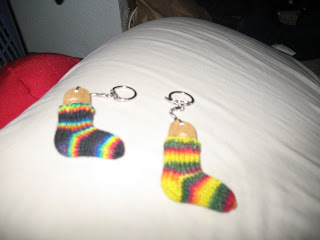 Last week, I got yarn in the mail. Always a good thing. I got new yarn from the one and only fabulous Susie. Two skeins of something secret (I'll show you eventually) and this beautiful skein in her colorway November 15. 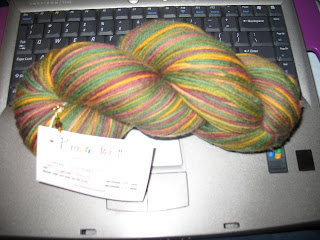 This yarn is (likely) going to one day become hunting socks for my husband.)

Susie (generous, kind soul that she is) also sent me this bag of mini/scrap skeins of her hand dyed yarns, for me to use for tiny socks. 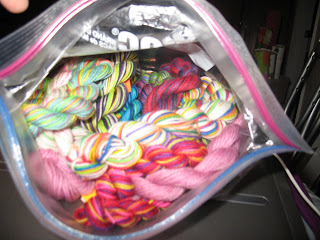 (See those above? Those are her yarns.) Thanks again, Susie!!

Christmas
.
Christmas was wonderful here. We were all together (my parents, the siblings/spouses, and the children) and that in and of itself was fabulous. I received so many great gifts and enjoyed so much delicious food. My sister bought me a skein of beautiful handspun alpaca (which I haven't taken a picture of yet) and a cute little sheep finger puppet.
.
Remember I told you about my brother-in-law, Jeff? Well, Jeff occassionally reads this little blog and apparently he has been paying attention because look what showed up in my Christmas goodies: 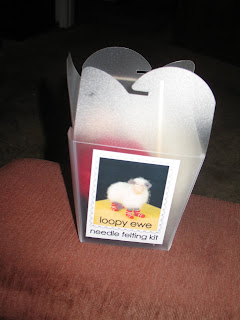 The Loopy Ewe kit I had been longing for! When we got home from my parents, I immediatley sat down and started trying my luck at needle felting. The legs are sort of hard and I am sort of sleepy but here is my progress so far. 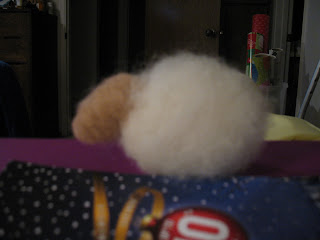 So, that's it. Now I think I'll sleep some more.

Today's Quote:
"The earth has grown old with its burden of care
But at Christmas it always is young,
The heart of the jewel burns lustrous and fair
And its soul full of music breaks the air,
When the song of angels is sung."
-Phillips Brooks
Posted by Kristy at 12/25/2007 11:33:00 PM 15 comments:

Just a quickied to say that I'm headed out to have my surgery. Thank you all so much for your sweet emails and your kind words and prayers. If you've sent me a note or a message and I didn't reply, I apologize but please know I did get all of your emails and I so appreciate your kindness.

In the time honored tradition of Dr. B, I give you this little tidbit I overheard yesterday:


I was sitting in the waiting room at the ankle doctor yesterday, waiting for my pre-op appointment. In that group, there are four podiatrists. A 60-ish looking husband and wife were there to see a different doctor than mine and they were standing at the counter beside me.

Receptionist: "Ok. I can get you checked in"....followed by the usual insurance and contact verification and chit chat.

Receptionist: "Do you two want to go back together or would you rather the nurse call you separately?"

Husband: "That's fine. We can go back together." (Shrugs) "I've seen her boobs plenty of times before."

"If I were two faced, do you really think I would be wearing this one?" -Abraham Lincoln

Zoom - Whishhh....What Was That Noise?

Three whole weeks and not a single post. Shame on me. What the hell is my problem? Where does the time go? Crazy, crazy, crazy. I have been thinking about ya'll. Really I have. And I have been reading blogs but haven't taken the time to leave comments. (And I thought my blog stalking days were over.) I've been thinking about blogging...I've twice maxed out my memory card (roughly 160 pictures) taking pictures with every intention of writing some profound something about every single picture....Not gonna happen.

If I try to tell you everything at length, I'll never get this posted so instead I'll try to give you the high points and a few pictures.

Thanksgiving was a lot of fun. It didn't snow while we were in Oregon but it was very cold and that made me happy. If I pretended real hard, I could imagine the heavy morning frost was snow. (I'm easily contended.) By all accounts, the sweaters were a huge success, both at the Oregon Thanksgiving and at the festivities at my parents' house here. Mama says these were the best ornaments yet and I was so glad to hear it. Hopefully the tiny socks will be equally successful next year. (See? I'm already planning ahead.)

While we were at my MIL's, I took a ton of pictures. My mother-in-law lives down a rural road and the scenery around her place is beautiful. There is a small creek that runs under the road on the way up to her house and it is such a pretty area. Every time we visit her, I tell myself I am going to walk down to the creek and take some pictures but I never do. This time I finally did. I took nearly 100 pictures on that walk. It has been a relatively dry year so the creek is low but that just serves to show off the rocks. It was cloudy and gray and cold that afternoon and it was really just perfect for a picture taking walk. Here are a few. 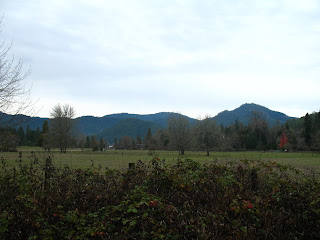 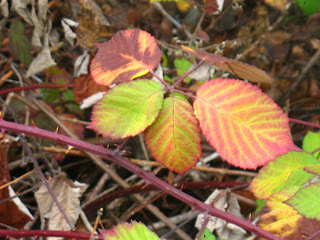 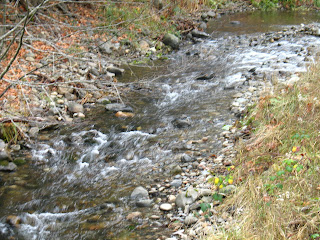 I've been working on a secret project. Not secret because it is a surprise for anyone - it's actually something for me - but secret because I am thinking about submitting the pattern for something. Anita at the LYS has agreed to test knit the pattern for me (as soon as I get the pattern worked up to a point that someone other than me can read it...) Anyone else interested? It is a felted something, uses a single skein of Cascade 220 or similar feltable wool. If you'd be interested in doing a little test knitting, leave me a comment or send me an email. (crickitleigh at hotmail dot com) No hurry...it can wait until after Christmas, even after the first of the year.

I've also been working on socks for Lori. Once I've got it all figured out, I'll share the pattern with you. I am very happy with them so far and (hurray) after turning the heel, it fit Lori. I'm still fiddling with the leg pattern. The always fabulous RC is helping me work out the pattern. Here's the sock so far, relaxing in my as-yet-undecorated Christmas tree. (I've only had the tree since Saturday. I'll decorate it soon. Really, I will.) 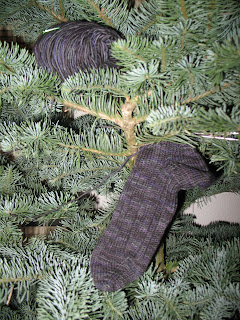 Sunday night I made these stitch markers for Deb. Now I just hope she shows up at knitting tomorrow night... 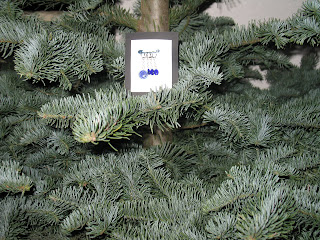 I also made stitch makers and earrings for Trixie but, in my enthusiasm to get them in the mail, I didn't take any pictures. Maybe she'll take pictures once they arrive on her end.

I've talked frequently about my SIL Lori and my sister Katy but I've never talked much about my BIL, Jeff. Jeff is more like a brother than a brother-in-law. My oldest sister, Carrie, to whom Jeff is married, is 10.5 years older than me. I first met Jeff when I was 5. When we were little, we thought for sure Carrie would marry her friend Sam (when you're little, sometimes it is hard to distinguish friends from "friends") but we have always been glad she married Jeff. Jeff and Carrie are the parents of Whitney and Tegan.

So during the last few years, Jeff has been working on getting his private pilot's license. Friday I had the distinction of being the first adult in the family to fly with Jeff. And we had such a good time. Thankfully I remembered to take along my camera. I took tons of pictures, most of which are nearly indistinguishable if you don't know what you are look at. Here are a few that are easily identifiable.

Jeff after completing his pre-flight check. 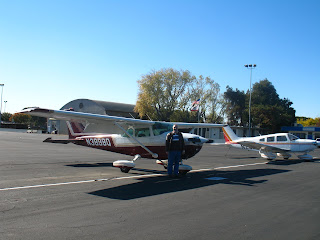 My neighborhood is so peaceful from up there. 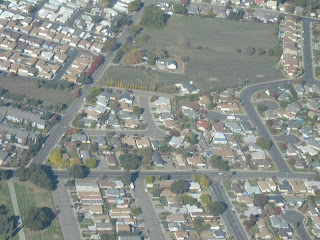 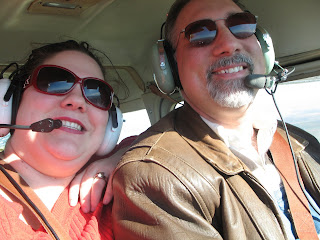 
As Jeff is fond of saying: take off is optional, landing is mandatory. Sadly, I was distracted during landing and didn't get a picture or video then. I am happy to report, however, that we did indeed land safely. And it was a very smooth landing at that.

Things have been crazy here and that can be largely attributed to Tuesday's upcoming ankle surgery. Between trying to get everything at work all caught up and on auto-pilot as much as is possible, and trying to get all of the laundry and Christmas shopping finished at home, I feel just the tiniest bit overwhelmed. I'm sure it will be pretty steadily hectic until next Tuesday morning. Hopefully I'll have a chance to post before then....time will tell.

Kristy
I live, work and knit in Northern California, where I spend more time working than anything else and I think this is one of the world's greatest tragedies. My husband pretends to care about knitting and I pretend that it matters.

Contribute to the Cause!

Previously on Ok! What Next??